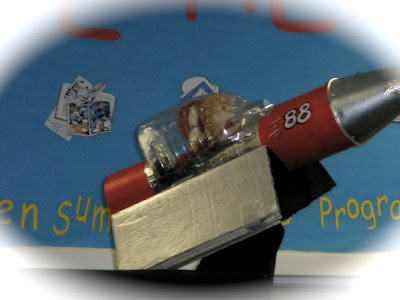 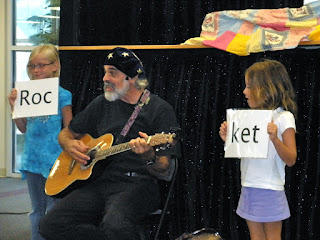 Join Little Red as she rockets off to the Grandma planet. Is the Space Wolf far behind?  Her Friend Jack climbs a beanstalk thru a wormhole to an adventure with a one-eyed giant.  These old fairy tales receive new life entwined and set in a far away galaxy. 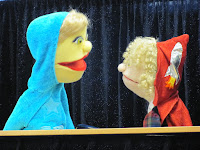 Little Red & Her Rocket 88
In this version of the story,  Little Red like everyone on her planet (Hoodie) travels by rocket.  She just got a new one  an "88", and she is anxious to show it off to her sick grandmother who lives on the Grandma Planet.   Her mother warns her about the dangers of Space Wolves and cautions her about the Space Port. 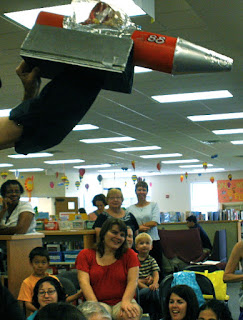 Little Red teaches the audience the countdown song and heads for deep space.  Of course she stops at the Space Port one of her favorite places because of "the many interesting aliens". 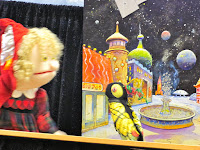 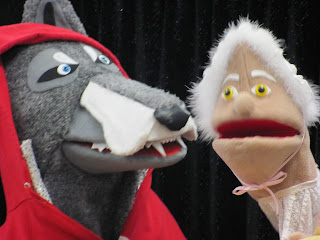 There she meets a Mr S.W. who, learning of her grandmother's illness, advises her on a good planet to collect flowers from,  and offers to send a get well card if she will share the address. 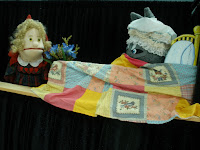 Mr. S.W. is of course a Space Wolf .  He puts on a disguise and races to Grandma's ahead of Red.  He swallows Grandma whole.

Donning another disguise he hops in her bed as Red arrives.  Red too is consumed by the wily  space wolf . 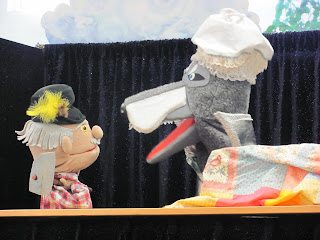 Only the timely arrival of Grandma's friend Woodrow can thwart the villain's  efforts to depopulate the Grandma planet.  Does he have a tool that can handle a Space Wolf? 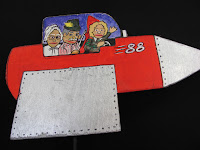 He unsheathes his light saber and cuts the Space Wolf in two releasing Red and Grandma.  They make a delicious spacewolf stew. Then they all go for a ride in Red's Rocket 88. 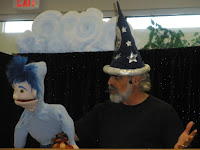 Jack, the Beanstalk, and the Worm Hole
Jack is Red's best friend.  His family has fallen on hard times since someone stole their family treasures ( a duck who lays golden eggs and a magic harp that won them big prizes on the show "Our Planet Has Talent").  Jack is on his way to sell their beloved cow when he meets a wizard.  The wizard buys the cow for magic beans guaranteed to "Take you across the galaxy and make your fortune!" 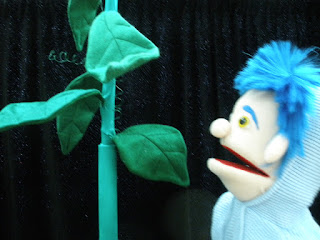 Jack's mom faints when she finds out.  Then she throws the beans out the window and sends Jack to bed.  The beans growovernight into a mighty beanstalk reaching into the clouds. 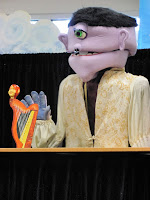 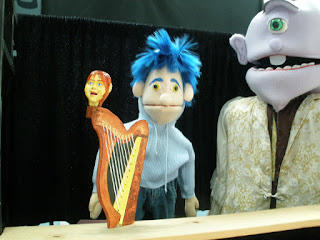 Jack climbs the beanstalk only to be sucked into a strange vortex called a wormhole.  The wormhole deposits Jack on a faraway planet where you can walk on the clouds.
Jack investigates a castle and finds it is occupied by a giant cyclops.  The cyclops is the one who stole his family's treasures.

When Jack tries to reclaim the treasures the giant chases him into the clouds.  He can't find the wormhole and the giant is catching up.


The wormhole finally opens, but instead of sucking Jack back home to Hoodie, it spits out a Rocket 88. 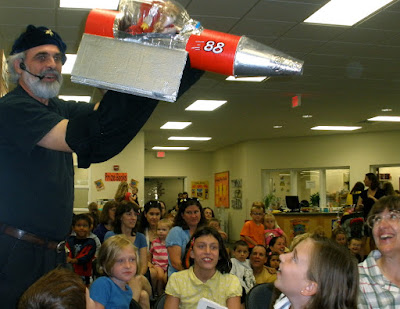 It's up to Red and the audience to save the day. 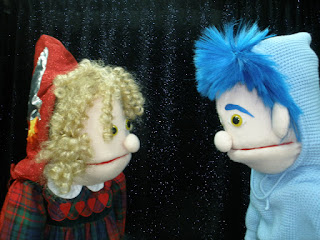 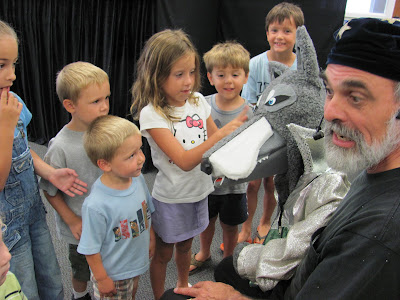 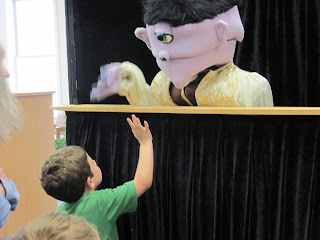 
Good Morning Joe:
It was truly a blessing to have attended last week’s performance at George Mason Library! Your rich cultural fable presentation was a welcome addition to our Spring Camp adventures.  Our students had a fantastic time.  You made quite an impression on even our youngest attendee (2 ½ years old). At pick up, she excitingly grabs her coloring sheet and on the way out could be heard detailing/retelling the story with emphasis on the Monster and the Big Bad Wolf to her nanny….. The impression was a “Wow” moment!
Again…thank you with wishes for all the best!
Monica Jackson      www.jacksonchildcare.vpweb.com
Jackson Child Care a 5 Star Rated Family Day Home


Dear Joe,
Thank you so much for performing your awesome show at Towson Library.  I loved the way you changed these classic stories into something more modern and fun!  And, I love the lightsaber!  Great Job!
Thanks again,
Mellisa (program coordinator Towson Library Baltimore County) 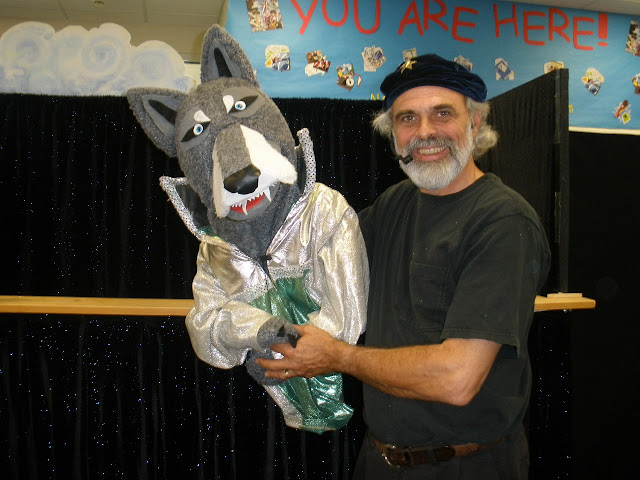 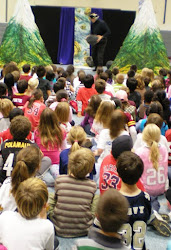