The Company
Founded by Jeanne Wall and Joe Pipik in 1994 the Goodlife Theater has collaborated with a number of skilled entertainment professionals over the years.  Here's some biographical information about our current performers. 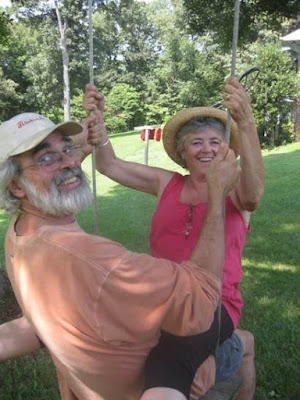 Jeanne Wall
Sometimes better known as Lula, Jeannie is the source of the GoodLife theater's sparkle. Her wit and artistic designs have fueled every production we've created.  For more than 40 years she has employed her skills as a clown, juggler, unicyclist, puppeteer, musician, dancer, designer, and educator to bring humor and joy to her audiences.  From her early days as a member of Mountain Mime touring the country and performing on the streets and at festivals to performances for Wolf Trap and the Kennedy Center, she has consistently demonstrated her innate ability to connect with diverse audiences.  Jeanne moved to the DC area in the early 90's and completed her degree in Drama Therapy from the Univ. of Maryland.  In 1994 she and Joe Pipik created Goodlife Theater.  Jeanne taught drama for Mount Vernon Community Children's Theater for several seasons. She is a Wolf Trap Master Artist, and conducts classroom residences, as well as presents workshops on teaching science and literacy through the arts .  In 2000 Jeanne was commissioned to design & perform a special shadow puppet show for The National Museum for Women in the Arts in conjunction with the Julie Taymor Exhibit.  She is proudest now of her successful blueberry crop and gardens, and being part of Plant A Row, an organization that grows food for local food pantries.

A puppeteer, musician, writer, and all around good guy, Joe has been performing with puppets since 1974 when he worked with The Mulberry Thunderbridge Puppet Theater in Cambridge Massachusetts. In 1975 he moved to Washington DC to work in the dynamic music ensemble Pipik & Synk.  In 1976 he met Michael Cotter and joined his Blue Sky Puppet Theatre.  Working on the street with the political shows Forgive and Forget (the Dick Nixon Story) and The Puppet President he collaborated with Michael, and Jeremy, and Joann Young in creating a number of Blue Sky favorites performed to this day including: The Barker of Seville, Lights Out on the Bunny Brothers, Rufus the Red Nosed Raindog, The Missing Piece, Phase Shifters,  Santa Clause GS12,  Elementary My Dear Rufus and The Three Not So Little Pigs. At the same time he created Joe's Shows for his one-person productions. Throughout,  Joe's unique humor and improvisational skills flourished.  In 1983 he produced a 45 rpm single, Turkey Who Gave the Gobble Up & The Thanksgiving Blues.  It received airplay nationwide including a spot on NPR’s All Things Considered.   In 1990 with friends Michele Valerie and Ingrid Crepeau of Dinorock he collaborated on the Wammy Award winning CD,   The Great Dinosaur Mystery as well as shows like Dinosaur Babies and Dr Dinosaur,   He has recieved a number of grant awards from the DC Commission on the Arts.  He is a Master Artist with the Wolf Trap Institute and regularly conducts residencies and teacher training workshops on using puppets to enhance curriculum objectives.  In 1990 he created the BackPack Puppets which replaced Joe's Shows for his solo efforts. In 1995 he married Jeanne Wall with whom he created the GoodLife Theater and created a good life full of love and laughter.